Monday, April 25, 2011
Day two
We chartered a private boat and boarded everything at about 7am from the private dock at the office. The supply had a complete set of everything and almost anything we could need: from bailout cylinders and decompression oxygen to a booster pump and double cylinders. The plan was simple, go to Gordon Rocks, a collapsed crater in the north east side of Santa Cruz Island and dive a cavern that came to our attention in August 2010 while diving with Andy Phillips.
The dive site is very short and mobility is often limited by the ever changing current direction. To locate and explore a little bit further the cavern inside this crater we had to start the dive from the outside of the crater, drop down to 40 meters and start working from there. For a first dive we planned a maximum depth of 45 meters, a conservative limit for our air diluent cylinders and a profile of 20 minutes at that depth, then and ascent to 25 meters for another 20 minutes and 40 minutes at 15 meters afterwards. We droped in the wall and swam for a while...
We found the cavern. I had the lead with a Dive Rite 10 watt HID cave diving light. Peter and Claus had Light and Motion LED lights mounted on their cameras and followed in a cave diving formation; we deemed the use of a guideline unnecessary. Although Peter, Claus and me had cave and/or wreck training, penetration was limited to cavern practices and sunlight was always regarded as our visual reference for the exit.
We were diving well above the sand bottom and the grotto had no ceiling so loss of visibility and percoilation were not potential problems. We swam for about 50 meters and as the grotto narrowed I pointed “restriction”and “turn”. The bottom of this grotto is at about 50 meters and the sand formation creates a wider area. Further exploration with light trimix in the unit and a more ambitious penetration objective is something I am keen of doing sometime soon.

After exiting the grotto we continued the dive with a nice steep wall and around the conventional dive site. We exited the water a one hour surface interval was followed by a second dive following the recreational dive area. In the second dive we had some wildlife including many green sea turtles, a couple of hammer head sharks, white tip reef sharks, eagle rays, sting rays and reef fish. 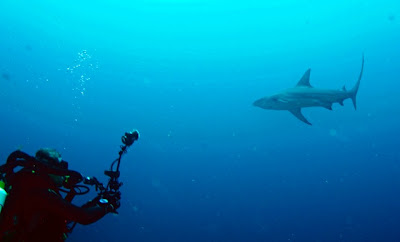 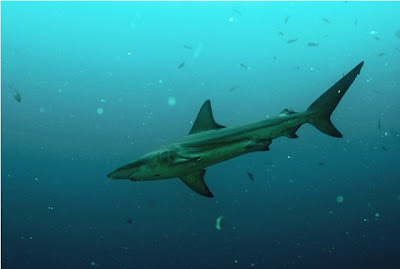 We got back to the office and started preparing and rinsing everything. The next day we would board Deep Blue, a diving vessel in the Galapagos Islands, to go on a weeklong diving cruise with our CCR’s. Two oxygen cylinders, one booster pump, 40 kilos of sofnolime, toolbox, spares, three rebreathers, two cameras and housings, fill whips, adapters and almost everything we could need were boarded on a truck at 4:45am. We arrived in Baltra at 6am and boarded the ship.
A short text on day three of this "Galapagos Rebreather Liveaboard April 2011" and some more shots will be published tomorrow.
Jorge A. Mahauad
Posted by Unknown at 5/03/2011 09:50:00 AM 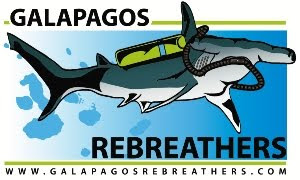